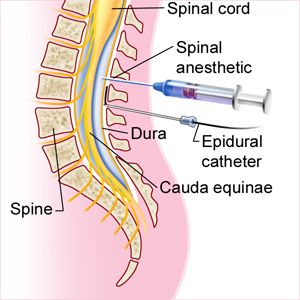 Spinal anaesthesia is the technique of choice for Caesarean section as it avoids a general anaesthetic and the risk of failed intubation (which is probably a lot lower than the widely quoted 1 in 250 in pregnant women). It also means the mother is conscious and the partner is able to be present at the birth of the child. The post-operative analgesia from intrathecal opioids in addition to non-steroidal anti-inflammatory drugs is also good.

In pediatric patients, spinal anesthesia is particularly useful in children with difficult airways and those who have are poor candidates for endotracheal anesthesia such as increased respiratory risks or presence of full stomach.

Prior to receiving spinal anesthesia, it is important to provide a thorough medical evaluation to ensure there are no absolute contraindications and to minimize risks and complications. Although contraindications are rare, below are some of them: